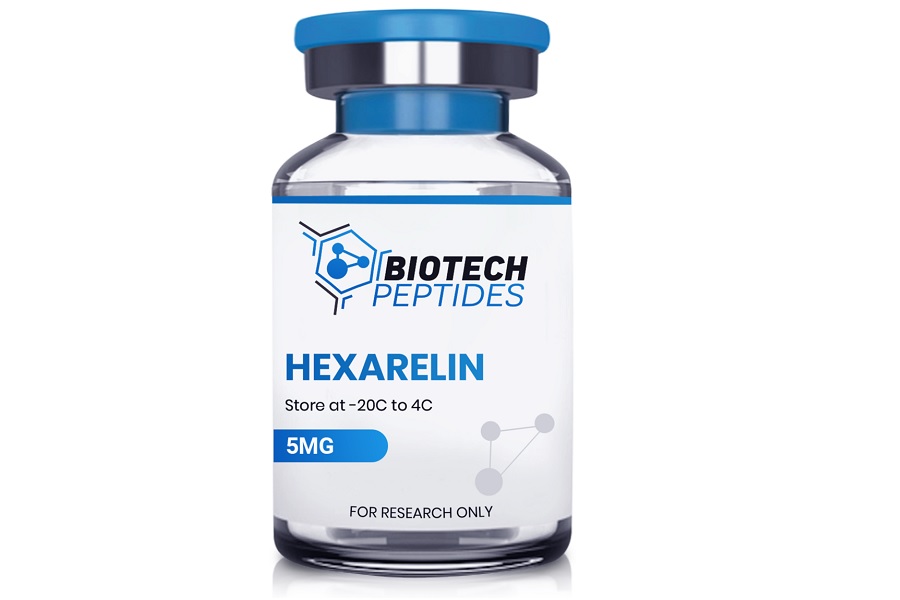 Ghrelin is a hormone which is produced by the enteroendocrine cells in the gastrointestinal tract. Especially the cells in the stomach are the source of this hormone. It is called the “hunger hormone” as it increases the intake of food. The levels of this hormone are at highest before mealtime while it is at the lower level after this period. GHRP-6 or growth hormone releasing hexapeptide is one of those synthetic analogues that are used for GH or growth hormone releasing activity. This hormone is one of the growth hormone secretagogues. Hexarelin or Examorelin is a synthetic equivalent of ghrelin and also shows some similarity to GHRP-6. The only exception between GHRP-6 and Hexarelin is the absence of the two methyl groups in the structure of Hexarelin. Like other ghrelin analogues, this peptide is active both sublingually and orally. This peptide has been studied extensively due to the impact it has shown on cardiac cells. It was effective on the cells that survived nutrient deprivation and ischemia.

This peptide has shown that it is not only effective on cardiac cells but also on cells in general. The peptide GHRP-6 is capable of controlling mitochondrial dysfunction and calcium flow in the muscles as it was applied to rats suffering from cachexia or extreme weight loss caused by chemotherapy or illness. By maintaining the integrity of mitochondria, this peptide also helps in kipping the muscle cells viable. The muscles get their energy to carry out all the day-to-day tasks from the mitochondria. Chemotherapy often causes disturbance in calcium ion regulation. It is one of the main reasons for lean body and altered muscle mass during cancer treatment. GHRP-6 can actually re-establish the normal regulation of calcium post chemotherapy.

Protection for the heart

Hexarelin associates with the GHSR growth hormone secretagogue receptor and CD36 receptor and has direct effects on the heart. The research was conducted on murine models and the results showed that this peptide is capable of protecting the heart from the effects of cardiac arrest. It prevents apoptosis of the heart cells by interacting with mentioned receptors. Hexarelin reduces the levels of cardiac cell death maker or malondialdehyde and increases the numbers of surviving cells. Hence, the peptide is capable of improving the condition. It also shows that GHRP-6 is partially better than Ghrelin as it comes to function. Cardiac remodeling during cardiac failure can be fatal as it decreases cardiac functions. Research on rats showed that it prevents myocardial remodeling while improving oxidative stress. The rats treated with GHRP-6 shows better improvement than the non-treated ones.

This peptide can be used for treating a number of cardiac issues. The mode of action of this peptide on cardiac arrest is not specific. Rats with diabetes were also treated with the peptide. The result was improved cardiac function due to alteration of potassium and calcium processing by the cells of cardiac muscle. As cardiac arrest is one the leading causes of death in most countries, this peptide is helping scientists to explore complex cardiac conditions. Buy Hexarelin Peptide solely for laboratory usage to explore its mode of action.